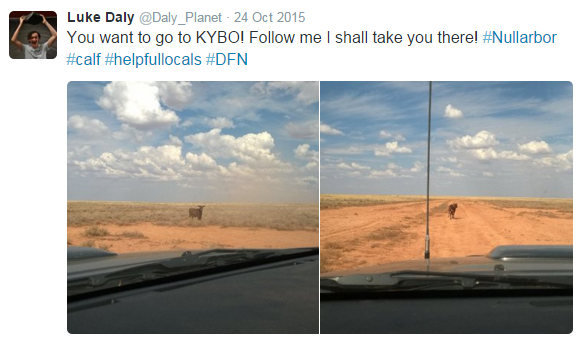 Up with the sun at 5 am – ouch!
The plan: to service the Kanandah and Kybo cameras and get as far towards the Eyre Highway as we can. After honey toast and tea with a side helping of flies … We loaded up the truck again, pumping up the tyres that had lost a bit of air overnight. We set off at 7 am arriving at Kanandah at 9 am. The locals (a herd of screaming cattle) made their way out to greet us at the gate. We felt like royalty!

In an ideal world we would have been in and out in 30 mins. However, we are not the subject of a theoretical physics experiment and this world is not ideal. The blower (a funnel to direct a constant jet of dust-defying air over the lens) on the camera had shattered under the harsh sun so we had to replace it. When we were ready to put things back together, I had of course, managed to lose the bolts for the sun shield and had to spend a long time scrabbling around in the dirt to retrieve them. At least meteorite hunting will be easier than finding red rusted tiny bolts in red dirt. After that minor setback Martin played computer games/made sure the camera works properly, hunting down bugs in the software and purging them. I hunted down a few bugs of my own and topped up the batteries with distilled water.

As we were approaching Kybo, we were greeted by an overexcitable calf that decided to lead us to the station.

We arrived at the station and the temperature had just hit 45°C! Camera servicing was going to be brutal under this sun. As we got out of the car we turned and looked behind us and saw a huge thunderhead rapidly approaching our position.

So we popped in for tea and biscuits with station owners Rod and Jill.

The problem was identified within minutes of arriving. The batteries had corroded so badly that the wire leading to it had rotted away, breaking the connection, meaning definitely not a quick fix. We grabbed the tools to get started as huge billows of smoke rose from the ground not 1 km away. Initially we thought the lightning had ignited the field since the storm cloud was now right above us.

Our camera’s height allows it to get good, uninterrupted images of the sky, it also makes it a perfect lightning rod.

The wind suddenly picked up and we legged it to the car just as the dust storm hit.

We set to work, Martin reattached the wires to the battery. With the camera now powered, we realised one of the components was not talking to the rest of them. We had to cannibalise one of our spare cameras to do replacements.  The sun was fast setting by the time we had finished.

We drove back to Kybo station and shared a joke or two about the weather with Rod and Jill. They generously offered us accommodation and hot showers, but sorely tempted sa we were, we wanted to keep driving to get as far south as possible. As we were leaving, Jill asked us if we could drop off some poetry books for her son in Mundrabilla. We somehow found space in the car and we can now legitimately say this trip is ‘poetry in motion’. Sorry.