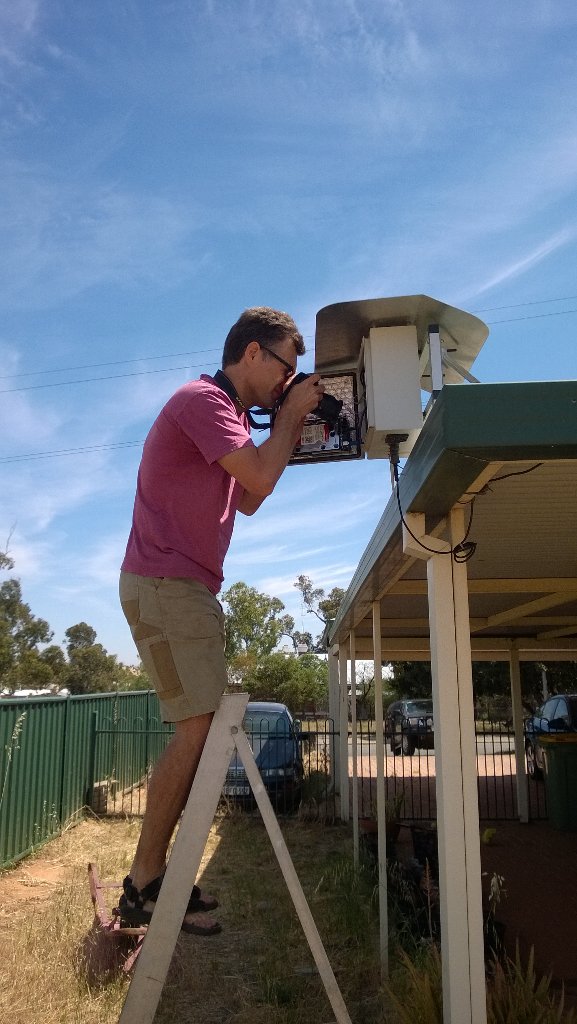 Dear Diary,
The car is now so heavy with things that it nearly didn’t make it up the hill outside Martin’s house. The clutch actually started burning, there was smoke everywhere and the smell has followed us. It’s as if the car is still annoyed at its mistreatment and won’t let us forget it. We had to roll back down the hill reverse a bit more and get a run up …

Next stop is Northam to check on the camera that’s been behaving badly. It’s 10:30 am and already 31 °C. We took a few pictures of the GPS for Rob back in the lab so he can determine the problem. Easy. One camera down before lunch on day one – go team Martin and Luke!

We stopped once more in Coolgardie for fuel and a bite to eat: chicken schnitzel and chips, the schnitzel surprised us by being made from ham … Passing Kalgoorlie there was a deliciously ironic sign that said dumping waste invokes heavy penalties, right next to the huge spoil tip from the super pit. We drove on for a time noting the clouds gathering around the setting sun, and about two hours along the Trans Line (or Trans-Australian Railway), we stopped to make camp. It was still 35°C so the fire was more for aesthetics than warmth. As we already had an unusual lunch experience, we were still full and didn’t want to introduce good wholesome food to the abomination sitting like a lead weight in our stomachs, so we contented ourselves with an avocado, olives, and some bread.  We were about to set up swags for an early night when we noticed flashes in the distance – a storm was brewing in the west and heading for us. Typical isn’t it? I don’t often go to the hottest, driest places on earth but whenever I do it rains.

Luckily, the wind changed at the last minute – our campsite caught just the edge of the shower and importantly avoiding the forked lightning!