Posted at 10:32h in News by Jay Ridgewell 0 Comments
0 Likes 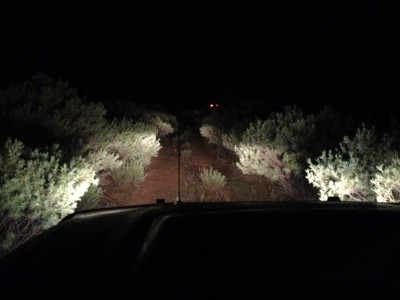 The “road” looks much narrower at night

Our day started out well, albeit with a few hiccups.  Getting the camera to connect to Telstra took some effort, but that was solved fairly quickly; now we can talk to it and download pictures directly from our offices at Curtin University.   The camera became the first brand new addition to the Desert Fireball Network of the trip.  Two cameras are installed; we have 3 to go.

The rest of the day can be described in 1 word:  driving.  We had lunch again at the WA/SA border, where Luke and I looked at and debated fossils in the rocks.  About 1.5 hours after, we had another minor setback.  Rob and I stopped to admire a large, gorgeous wedgetail eagle that was perched in a tree near the road.  When starting up again, we realized that we’d blown a tire on the Land Cruiser (~2-3 inch gash in the side of the tire).  Clearly, this tire was not repairable, and the first of 2 spares got put to use.  About 30 minutes later, though, we got to see a wild camel (our first of the trip, and my first ever), so there was a silver lining to the mishap.  Camels can run a lot faster than I thought they could.

Finally, we arrived at the site of the next camera.  We are now sitting by the fire, arguing about imperial vs. metric system units.  Work is clearly done for the night. 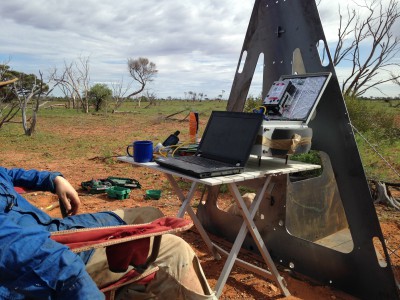 Hard at work setting up the cameras

In the last two days, we’ve set up 2 new cameras and driven quite a ways.  This, however, is where the similarities between the days end.  While yesterday went almost seamlessly, today has turned out to be a bit of an adventure, to say the least.

Last night, after installing the 3rd camera, we stopped to camp on a desolate, empty stretch of land.  Waking up here was almost like waking up on Mars:  bright red dirt, little to no vegetation, and a few scattered cobbles strewn about.  The land was so flat that you (well, I) got disoriented and ended up walking away from our camp instead of towards it at one point (scary for a second, until I turned around and saw the cars J).  Unlike Mars, however, this area appeared to be a major “camel highway.”  Camel trails were visible from the road on our drive up to the 4th camera site as well.

After having lunch (with a cup of tea- there are a couple of Brits on the trip) and setting up the camera, it was late afternoon and time for another long drive.  Since our cameras are a fair distance apart, and the roads more slow-going than anticipated, we’ve had to do a lot of our miles after sunset.  This hasn’t been a problem until tonight, when the dark, the weather, and incorrect/non-existent roads being on our map combined for more excitement than we were hoping for.

The area we were driving through is part of a cattle station, with “roads” between bores (holes drilled into the ground to provide a source of water to the animals).  What we discovered was that these “roads” were actually cattle trails in many cases.  And once we arrived at a bore, these “roads” became a maze of tracks, making it hard to spot the junction/cattle crossing to the next bore.  So at each one, we had to do a bit of searching/driving around until the next trail was spotted (in one case, we accidentally drove into a bog and needed every bit of power/4WD at our disposal to make it out).  Suffice it to say, we learned to take the “roads” on the map as rough guides rather than an exact route.

Then there was the weather.  While driving, we saw quite a bit of impressive lightning to our north.  We were hoping it was far enough away that we’d miss the worst of it.  This was not the case.  The rain began to fall shortly after we made it past the second cattle bore.  We made it far enough away to avoid the majority of the cattle smell/flies and found a decently flat bit of land to set up camp.  Shortly after putting the sausages on the stove for dinner (~10:30 pm), it began to rain a bit harder.  And lightning and thunder soon accompanied it.  After ~20 -30 minutes, it would ease up for a while before hitting again.  Every time the lightning hit, we’d scurry into the Utes and wait it out, hoping for the storm system to pass.  This did happen eventually, but not soon enough to avoid spending the night sleeping in the cars.  The Land Cruiser, in particular, was not designed for sleeping.  Martin T, who couldn’t manage to fall asleep in this less-than-comfortable vehicle, was the only one of us that made it into his swag before sunrise.

Despite, or because of, our (mis)adventures, this has probably been my favourite day in the Nullarbor thus far.  I’ve been lost (if only for ~30 seconds) in the middle of nowhere, watched an incredible series of thunderstorms, and got to see even more kangaroos during the drive down from the camera site.  It’s hard to imagine a more eventful day in the field. 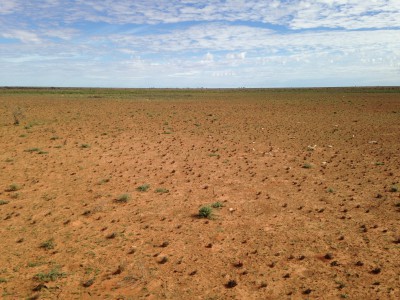 The land goes from this … 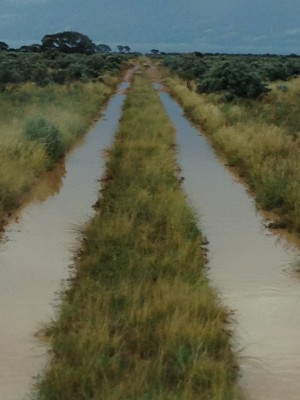 As you may have guessed, the weather today has been less than cooperative.  We woke up, had a quick breakfast, and got out of our makeshift camp as quickly as possible.  Not long after that, the rain started… and continued… and became a torrential downpour… and eventually stopped about an hour after our tire mishap.  No lightning today, just a steady rainfall of varying intensity.   Around 3:30 pm, we came upon our 5th and final camera site of the trip.   After we all unloaded the mud-drenched Utes and carried all the equipment to the site, our jobs diverged.  While Martin T and Rob began the construction of the camera stands, Luke and I set up camp and started dinner.  The menu:  chili-marinated steaks (Luke), sautéed zucchini with balsamic vinegar (me), and vegetable soup/stew (a collaboration of sorts, though Luke was in charge of the seasoning and cooking).  This was far and away our most sophisticated meal of the trip (though the guys may disagree and prefer the lamb chops from our first night in the bush).  After a night cap and some chocolate, I crashed and went to bed early (8-9 pm).  Apparently they had several more hours of fun afterwards that I missed out on, but after last night in the Land Cruiser, I couldn’t keep up, sadly.  The swag was never so comfortable.

Katie’s blog ends next week, with the vehicles looking much different to how they started out …