Posted at 10:01h in News by Jay Ridgewell 0 Comments
0 Likes

“Early to bed, early to rise.”  I do not follow this philosophy, as I was the first to bed and the last to rise this morning.  While the guys enjoyed coffee and fried breakfast, I was informed by Martin T at 9 am that it was time to wake up.  I think he was far too generous/took pity on me, but I was grateful for the extra hour or two of sleep.  By now, everyone is aware that I am not really a morning person.

For the next few hours, we continued the jobs of last night.  While Luke and I cleaned up camp, Martin T and Rob finished up with the camera.  If I am entirely honest, however, Luke did the bulk of the cleaning, as I was also eating breakfast and having my tea (note:  baked beans- a breakfast food for Brits/Aussies- are a nightmare to wash up after).  A bit before noon, we were done with our fifth and final installation.  The Desert Fireball Network now has 4 entirely new camera sites, and we are officially on our way back to Perth. 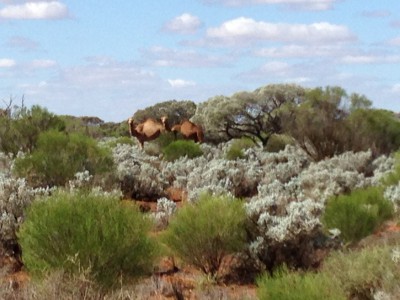 Almost.  On our way back, we were also tasked with “servicing” another camera hosted on Kanandah Station.  We had to replace its video camera and put in a new hard drive to store all our photos of the night sky.  Because our Land Cruiser has no spare tires remaining, and because Martin T budgeted for extra diesel, we changed our route to what we thought would be better roads.  While this is undoubtedly true, especially when it hasn’t rained the past day, it was not smooth sailing for us.  There were countless “puddles”/lakes/mud pits that needed to be deftly maneuvered by drivers, and each car had a close call or two where we thought we’d need to be pulled out of the sludge by the other vehicle.  Let’s just say that we’ll almost assuredly be paying an excess cleaning fee upon returning the Utes to Thrifty.

Finally, we made it to Kanandah.  The cameras are perched on a hill, and surrounded with metal fencing to protect it from the cattle.  Apparently, the adjacent shed hosts a colony of redbacks, but I did not want to find out for myself.  Even though it was dark, the job was finished quickly and easily, and we headed off to make camp for the night just outside the station.  It’s our last night out in the Nullarbor, as by tomorrow evening, we should be back in Perth.

As of this morning, our trip has punched in 2,263 km on the Utes.  By the time we arrive back in Perth, we will be well over 3,500 km for the 9 day trip.  That’s almost the drive from Perth to Sydney, except in that case, I’m sure ~1,000 of the kilometers aren’t on rocky and/or flooded dirt roads. 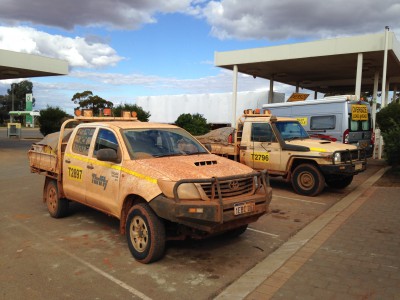 The morning drive followed the same routine as the last day or so:  semi-flooded roads that made the Utes dirtier, if that were even possible.  On the road to Kalgoorlie, however, you could see the vegetation changing.  Taller trees were growing and denser shrubs covered the ground.  We also began to see more vehicles (6, maybe?) along the railway road, and the rocks were becoming more interesting (i.e., not limestone).  We started out around 8:30 am from camp, and arrived in Kalgoorlie around 1:30 pm.  The first sign of civilization, sadly, was the huge “Super Pit,” the largest open-pit mine in the world, which dominates the flat landscape lets you know you’re back in the real world and no longer in the Martian emptiness of the Nullarbor.  It’s to the west of the city, and its huge piles of trailings are visible from the “Goldfields Highway,” Route 94, long before you actually pass by it.

When we made it into the first petrol station, I can proudly say we were the dirtiest set of Utes, and probably the dirtiest group of people, that had passed through that day.  No showers for us, however, as we still had about 600 km to go and Luke needed to get back for a 5:45 am flight to Sydney the next morning.  We stopped for a quick lunch at Coolgardie, which had better offerings than the BP station in Kal, and then settled in for the long drive home.

The latter leg of the trip was pretty uneventful, unless you count getting stuck behind a slow-moving “wide load” (a dumptruck on a flatbed) for 30-60 minutes exciting.  When you can finally go 110 km/hr on paved road, and you’re forced to slow down to 60 km/hr, the word “irritating” doesn’t even fully describe it.  Thankfully, sunset was their cue to stop for the night, and other than a quick dinner stop before Northam, it was straight through to Perth.  Luke dropped me off a little after 10 pm, and made it (I assume) onto his Sydney flight ~7 hours later. 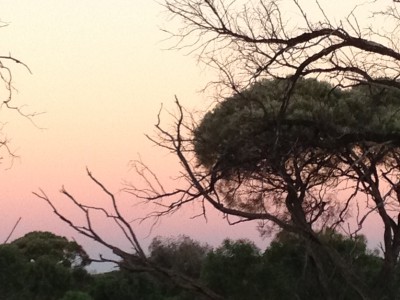 The close of another successful Desert Fireball Network field trip

As for the next trip, in the words of Bart Scott (American Football/”gridiron” player),  CAN’T WAIT!