Posted at 10:13h in News by Jay Ridgewell 0 Comments
0 Likes

Thanks to Katie Dyl for keeping a blog on the latest DFN trip – read on find out what it’s like to venture into the outback to install the cameras.

This blog will come in three installments – keep an eye on the twitter feed or facebook to know when then next is up.

Saturday 3 May:
After a LONG day of driving, it actually feels like our work/adventure begins today. We slept at a roadside campsite last night, where I learned my first lesson: zip up your swag, especially the waterproof, outer layer, on a “clear” night. After packing up (my) damp gear, we headed to Cocklebiddy for breakfast. Despite boasting about its animal populations (people: 8, budgies: 25), it was probably one of the best breakfasts I’ve had in Australia. And, according to Martin T and Rob, it was far superior to the offerings at the roadhouse before. 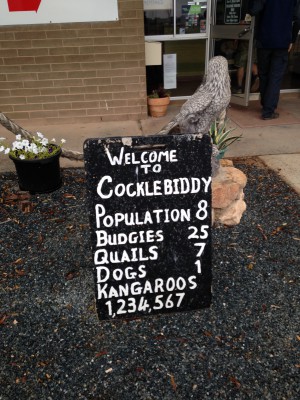 From there we drove down the escarpment, which gave a beautiful view down into the start of the Nullarbor Plain, got a final diesel top-up at Madura, and headed off into the bush for the next week. The first stop was Mundrabilla, where we had to install our first of 5 cameras. The camera site is on the property of the station owners there, who have been helping us with the Desert Fireball Network for years. After saying hello, and learning that they had a python slinking around and looking to get into their house, we drove up to the site and got to work. Since there was a camera here previously, we thought it’d be a quick ~45 minute stop to simply mount the camera, test it, and get started on the long drive to Forrest, a stop along the railroad.
As you might guess, that did not quite work out as planned. In what I hope is not a sign of things to come, the computer on the very first camera died at the very end of testing. Why? Who knows, but down it came and up went a new one. Luckily, we brought a couple of spare cameras just in case, and the next one worked perfectly. Mundrabilla once again has a working camera and is collecting images for us nightly.
Because of our setback, we were still on a, shall we say, “bumpy” road to Forrest at sunset. I can’t say I’m upset, though, as this meant we saw 6 large kangaroos having dinner as we came by. I’m from the USA, so I still get excited when I cross paths with them. And it’s not as if we’re on the highway, where you’re driving so fast that kangaroos aren’t a good thing to come across. We were going so slowly that they would just stare at us from the center of the road and hop off into the bush. Suffice it to say, I also still get excited to watch kangaroos hopping as well .
We got into Forrest around 6 pm, and the new managers, Mark and Sandy, greeted us with their sturdy Rottweiler, Tank. Forrest is a regularly used airstrip for small planes, helicopters, etc., as well as an emergency runway for 747s. So they’re quite busy despite how isolated it is. It is also already host to one of our cameras, so we were only going to stay the night and do a quick check of the site in the morning. Our stay included a 3-course meal, which was delicious, and we had a leisurely dinner talking with our hosts about how they ended up in Forrest, what work we do, and the various “meteorite hunters” that pass through. And aliens.
That was day 2 in the Nullarbor: one new camera, one fabulous meal, and my first real experience of the Australian Outback.

Sunday 4 May:
I’m writing this entry as Martin T, Rob, and Luke are building and installing a brand new camera station: our first in South Australia.
After getting our last diesel top-up for MANY days and saying goodbye to our hosts in Forrest, we began the day-long drive to our new camera site. The guys navigated while I wished I had learned how to drive manual (and off-road) before the trip started so I could help out. Instead, I listened to some Green Day (punk band), Finch (“screamo” band), several podcasts of BBC4’s “A History of the World in 100 Objects,” and “A Hitchhiker’s Guide to the Galaxy.”
However, our day did get broken up when we stopped at the Western Australia/South Australia border for lunch. We took the required pictures and ate lunch with the flies at the monument that demarcates the border. No customs, though- just flies. 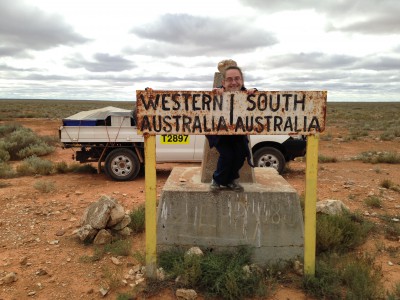 We made it to SA!

We got to our camera site just as the sun was setting- enough time to set up the camera stand, solar panels, and start camp. While Martin T, Rob, and Luke worked, I began writing this entry and tried to protect our gear from potential rain. At one point, there were rain clouds surrounding us from the west, so I was convinced we were getting weather. As it turned out, we only got a few gusts, so all that effort ended up being for very little. So with a few beers, lamb chops (or in my case, steak), and cheesy mashed potatoes (thanks to Luke and Rob), our night in South Australia concluded.