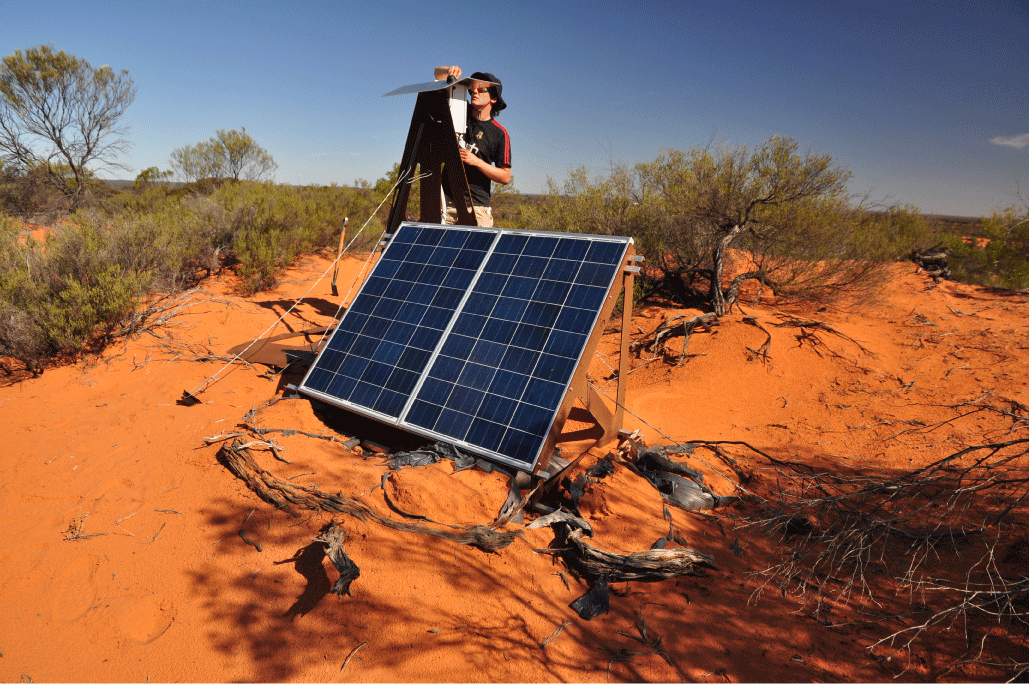 We woke up and almost didn’t believe the sun had risen it was so completely overcast. We headed a ways down the road until the Telstra signal was a bit stronger and then drove off and hid the stand for a new camera (remember how we didn’t bring all the gear to make a new one? Well, we’re not taking half of it back home again!). Our truck now significantly lighter and the leaf springs looking a lot happier, we drove off.

The road was starting to get a bit better and less bone-jar-y, but maybe that was just the added suspension from the removal of a few 100 kg of gear. I really don’t know why people spend so much money on theme parks and roller coasters when you can drive up and down sand dunes in the outback with much the same effect.

We got to Barton and had to walk across a couple of dunes to the camera which the truck would not have been able to get up. So we had to load ourselves up with all the gear we would need. After I thought we had everything Martin said”‘Oh and the shovel, remember the shovel”.

“To restabilise the dune” Martin replied.

Brilliant. So the only area for miles around to put a camera on was on top of a sand dune. Restabilising the dune involved digging up sand from the surrounding ridges and dumping it on top of the camera’s ridge,  along with bits of dead tree ans sticks to stop it from blowing away.

We had forgotten something else we needed: a new internet cable. So I traipsed back across the dunes to the car to retrieve it. The camera itself was happy enough, Martin ran his tests and thankfully it didn’t take too long as it was quite hot and shifting all that sand was hard work. We set off again and I gave Phil a call. The meteorite we were going to search for up north was not behaving itself. That is, our models were predicting different localities about 2 km apart every time the model was rerun. So we were tasked with checking out the southern end of the fall site and doing a quick meteorite search.

That afternoon, we continued along the Trans line. We still had one more camera to service before the search.