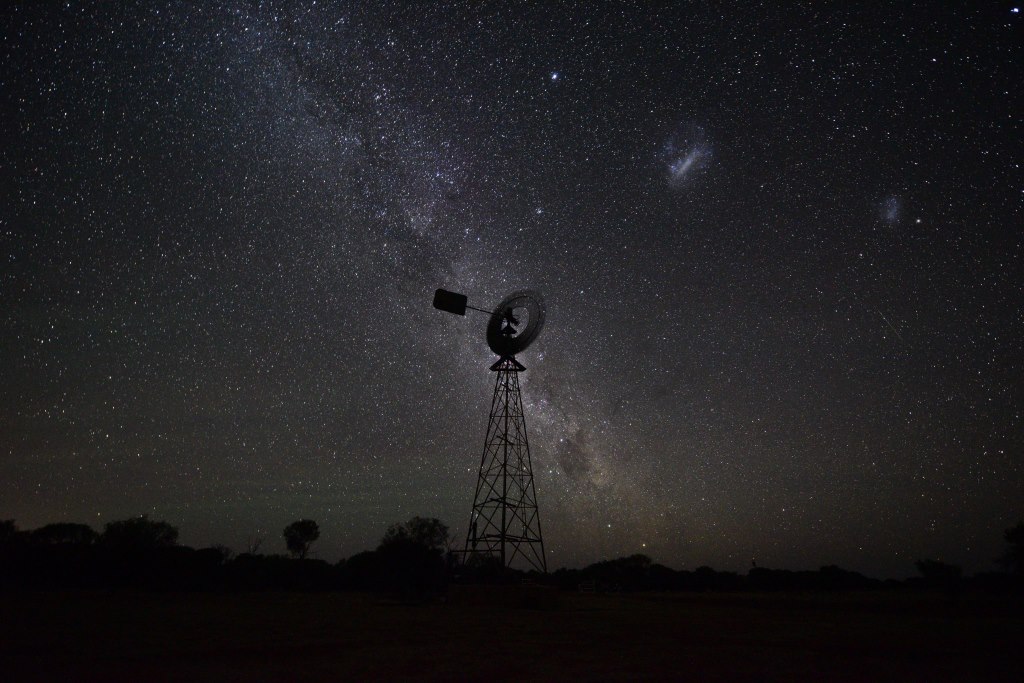 We planned our trip for mid-December, perfect timing to see the Geminids meteor shower. The aim was to take images of the Geminids, install a few of our kit cameras on roofs across the Murchison and service our North WA network .  The team is purely made up of the PhD students- this is going to be a fun ride!

Rob and Hadrien drove out one day before Ellie and I. As far as I’m aware, they forgot half the gear we needed and therefore had a lovely drive along the beach where they camped and then chilled in Geraldton waiting for us to catch up. 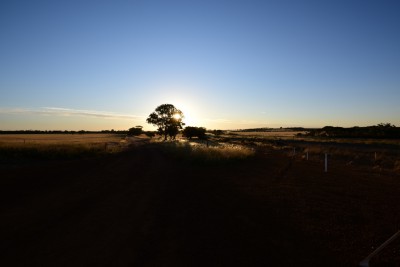 Ellie was teaching sailing in the morning so I  packed the ute on my own. Compared to last time, we had next to no gear; we didn’t even need the tarp or ratchet straps to tie anything down!  When we met up with the others, we cooked a nice meal of T-bone steak cooked over the fire, bliss! Then we turned our eyes to the sky and watched the start of the meteor shower, there were a few large meteors zipping overhead – it was already pretty damn impressive and there were still 24 hours to go to the peak!

The next day we headed up to Wooleen station and had a chat with David and Frances before going to check on the camera. Ellie and I made lunch while the guys worked. They soon realised that while one of our two cameras worked, the other had filled up the memory card but wasn’t talking to the external hard drives, so we spent a couple of hours transferring data to make enough space for the Geminids tonight – don’t want to miss anything!

We made a very makeshift shelter for some shade to sit out the heat of the day while we waited for technology to sort itself out. We passed the time eating lunch playing 3D noughts and crosses and some weird game involving dots and lines. I got decimated every time! Finally transfer complete, cameras ready to capture Geminids, we drove on, and further into the Murchison.

We stopped off at Mt Narryer station and had a lovely chat to Carol and got directions to the mountain itself. Then after getting lost and found again we bumped into Sandi (the other station owner) who showed us a fault line that ran through his station which was very cool!

It was getting dark and our plans were to load up with all our gear and climb up the hill before sunset to watch the Geminids from the top. After all the delays and rough terrain we finally got to the track leading to the mountain and got our first glimpse of it.

We have decided the Australian language must have evolved differently to the rest of the English speaking world because a mountain everywhere else on the planet is >1000 m high; this one was barely 100 m above ground level and its peak was only 500 m. Basically it was a mound, a very impressive mound, compared to the vast expanse of flat surrounding us but a mound never the less. Anyway, we never made it. We were scuppered by the most unassuming thing: a tiny bush about 30 cm high, which stabbed the side wall of our back tyre with its smallest twig. It immediately blew. Luckily I saw it go in a plume of dust and drove no more than 3ft saving damaging the car further.  Ridiculous! I’ve driven over sharp rocks, over creeks, over whole trees and it’s a lowly dead shrub that stops us! The change was pretty straight forward, but the tyre was irreparable and we all suddenly became a lot more paranoid about twigs. The shrub even had its own resident lizard which didn’t even blink as the car went over it.

We decided to camp on the flat just by where we got the flat. As the sun set we made camp, built a fire pit and got the toys out!  We set up a mobile DFN camera, a telescope and a set of 5 DSLR cameras on an astronomy mount. The  drone went up and had a quick flight – we were all set up and nothing was going to fly over us without us capturing it in about 4 different ways!

Night fell and as the crescent moon followed the sun over the horizon, the constellation Gemini started to rise. We still had several hours until the maximum peak at 2:30 am so we spent time looking at Jupiter,  its moons and Uranus with the telescope before realising the astro cameras gave much better images and got some cracking shots of the Orion Nebula and the Magellanic Clouds.

The conditions out there were perfect! There were so many stars that the heavens were aglow and once the fire had died down you could see by starlight alone. We had our dinner and then everyone went off to play with the toys.  I realised that the irony of this trip could be that we  spend all night staring down a camera lens and not actually seeing the geminids with our own eyes . With this in mind I cocooned myself in my sleeping bag with a G &T and some chocolate and enjoyed the show, and what a show it was!

I think the maximum actually happened at 1 am not 2:30 am and at its peak  there were meteors blazing overhead every five seconds! It was incredible, the sky was alive, and not just with Geminids: satellites went over, other meteors blazed, Pegasus set and the Southern Cross rose and then – almost as dramatically as it had begun – it ceased. We watched the last few meteors with a Christmas mince pie, leaving our swags unzipped to enjoy the the closing of the show as the first rays of dawn lit the horizon.

This is the only way to observe a meteor shower, I can’t recommend it enough! The only downside weres all the bugs.. I am also thoroughly convinced that the people who came up with the constellations names were on something that is currently illegal. Orion was the only one that makes sense, but in Australia he’s the wrong way up.

We were rudely awoken by the sun – far too early and far too hot! Before we left we flew the drone up the mountain so we could at least say we had been there … yeah, it counts!

We drove on to Boogardie station. The guys fixed the first ever kit camera in Australia to the roof and carefully avoided a nesting wag tail while Ellie and I made dinner. There were real life working showers near the building which had been generously put at our disposal so we availed ourselves of them with abandon and came out very clean, relatively speaking of course. Feeling refreshed, I sat down to enjoy the remaining few Geminids while Hadrien and Ellie did some light painting and experiments …

We packed up and I had another  ‘I saw something alive in Australia could it kill me!’ moment as I stepped out of the kitchen, something slithered under the building and I jumped about a foot in the air and realised mid jump that it was in fact a monitor lizard not a snake as I had first thought. Cool! That’s more like it! We took some footage of the camera with the drone and set off on the way Ellie and I finished listening to audiobook ‘Going postal’ by Terry Pratchett and started ‘Making Money’. Yeah, we spend a lot of time driving!

We arrived at Goodlands station and met a lovely family with their two young kids who were very excited about the prospect of flying our drone and were super helpful setting up the camera! We set about carefully threading the wire across the guttering to the roof, this one was quite high up so we took extra precautions! It was a pretty professional job, if I do say so myself, with very few wires showing! Hadrien drove around trying to find some Telstra signal to ‘talk’ to the camera and make sure it was happy and then it was play time – release Arthur (Ellie’s affectionate pet name for our UAV)! We flew the drone and let the kids fly it around.  The dog seemed to enjoy this as well, but we rescued Arthur before he was ‘fetched’.

We once again hit the open road heading back home via Northam. We had a swift bite to eat in Northam while some mossies had a swift bite to eat on us and then headed over to our camera. All that was required here was a quick hard drive change and blower change which was very efficient. It was quite late by this point like 10 pm late so we were very lucky that the owners let us quickly look at the camera before they went to bed, speaking of bed we were all knackered. But we still have to get back to Perth! Pedal to the metal for one last push, and we got in at 11pm. As we had to give the hire car back tomorrow morning we quickly unloaded our gear into the office and went home and conked out.

We were on such a high we were considering jumping on a plane to South Australia to pick up a meteorite we saw land in Lake Eyre before Christmas … But we thought we’d let someone else have that glory and pick up the easy one! Save us for the hard jobs!

Oh, and if you’d like to get out and see a meteor shower, download the Fireballs in the Sky app and use the augmented reality meteor shower finder!