Luke, Martin and Jarryd head off to Wolfe Creek meteorite crater in remote WA last week. The plan is to make a 3D image of the crater using a drone, map the crater, take some samples (to analyse for shock or melt glass and confirm the date of impact) and combine it all to make a virtual fieldwork laboratory so you can zoom around the crater looking at various rocks and features.

I was mildly surprised to wake up where I fell asleep – in my swag, with the first rays of the new day beaming in, as opposed to the standard cave, nailed to a cross, with a barely-contained man-eating dog, which is apparently common place here.

After a swift cuppa we ploughed on. I say driving, but I think we need a new term for basically holding onto the wheel at 110 km/hr in cruise control for 12-13 hours. It doesn’t require much skill beyond the basic toddler ‘grip and never let go’, the insomniacs ‘never fall asleep’, and the ability to find amusement in the vast swathes of nothing. Amazing stretch of cut grass on that verge… the nearest town is 100 km away – fantastic! … it’s abandoned! Wow, so the nearest inhabited town is 150 km. Wicked!

We also saw the largest salt pile in port headland – my initial thought was “That’s not very hygienic that’s going to end up on my table!” I then thought about this for more than two seconds and realised any hapless bacterium that did land on that pile would be mummified in the time it takes to say ‘parched’.

For those following this in the hope of drama you’re in luck!
Cue: slowly-but-surely swelling dramatic music in C minor…
We saw a properly beat-up car – doors flung open, all the windows smashed in and just abandoned at the side of the road.
Ooh, and now, a burnt out vehicle. And I mean freshly burnt out – the hay from the truck was actually still smoking (insert creepy music here).

We were also followed for 2 hours by a 4×4 dragging a trailer. It slowly gained on us. Which is odd, I thought, because there is barely anyone on the roads and anyone coming up behind you is usually doing twice the speed limit and zips past into the mirage 200 m ahead. No, this guy must have been a slight rebel with a ‘screw the rules’ mentality – but only just enough that he could plead ignorance if caught. So here came our stalker at 111 km/hr gaining on us in increments that snails would look at and think ‘I could match that!’ For your reference, being over-taken at 111 km/hr is about as exciting as watching F1 with no frame of reference. It took 2 hours too, so could actually have been the F1 in the same way that, in theory they are only 200 m behind but it will take them another hour to halve that distance. Safe to say, once they had eventually passed us we returned the favour and followed them for the next two hours. They did eventually move away, in increments relative to continental drift.

Sorry, were you expecting the gore here?

Other notes so far I have noticed in a completely subjective way suitable for this kind of old wives tales similar to ‘I had a headache and dunked my head in a deep fat fryer and my headache was gone’ :
Observation one:
I’ve noticed that in the outback there is generally no oncoming traffic until you come up behind a grey nomad doing 88 km/hr in a 110 zone and suddenly its Kwinana freeway at rush hour.

Observation two:
It is a well-known ‘fact’ that the further you go away from Perth the less specific the ingredients in pies become i.e. In Perth you can get your standard organic Wagu beef steak with free range pork bacon, cheddar, portobello mushroom and Guinness pie. 100 km out it becomes steak, bacon and cheese and 1,000 km out you get your basic ‘meat’ pie. For those to whom this is news, don’t worry it never gets as bad as ‘Ingredients: pie’.
Not quite on the same level as Cut-Me-Own-Throat Dibbler’s* pig sausages – where you always get the impression that they came from ‘an’ animal and not ‘from’ an animal and are always very nice in a very non-specific way that comes with being drowned in ketchup.

But, traveling further north it seems this case becomes reversed – I call it the Broome effect.
In port headland I bought a chorizo and spinach panini! I know – chorizo?! And spinach that made my eyes pop! Fortunately, there have been no more culinary atrocities since the Viking- funeral-style Damper. But we haven’t cooked tonight’s dinner yet!
We are 2,200km in and will arrive at our destination tomorrow. With any luck, I think I could have got anywhere else on the planet in 2 days. Apparently Wolfe creek is the exception. 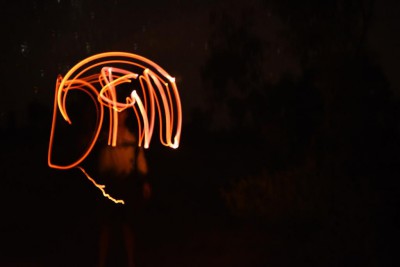 *Claude Maximillian Overton Transpire Dibbler, usually known as Cut-Me-Own-Throat Dibbler, C.M.O.T. Dibbler, or simply Dibbler, is one of the numerous bit part characters in Terry Pratchett’s Discworld novels. Described as Discworld’s most enterprisingly unsuccessful entrepreneur, a ‘merchant venturer’ in Ankh-Morpork, he is most famous for selling meat by-products to unsuspecting souls.