Luke, Martin and Jarryd headed off to Wolfe Creek meteorite crater in remote WA last week. The plan was to make a 3D image of the crater using a drone, map the crater, take some samples (to analyse for shock or melt glass and confirm the date of impact) and combine it all to make a virtual fieldwork laboratory so that anyone can zoom around the crater, looking at various rocks and features.

On our first full day at the crater the wind is howling – sadly, no drone flying today. Without the drone, I am superfluous to requirements so off I adventured into the crater. I walked through the centre in search of shade – difficult to find with the rapid rising of the sun. I’m a geologist at heart and although I’ve spent the last two and a half years worrying about rocks that come from space, doing some proper mapping for the first time in ages was a serious buzz! Yes, we are a crazy breed. I knew I wouldn’t have time to do this map the justice it deserves but I thought maybe I could get the gist at least. I spent the morning channelling my inner mountain goat – clambering up and down the inner rim (in the shade while it lasted and wilting when it failed).

Before I knew it, it was lunch time! I got back to my deflated colleagues who were mooching about the camp. Rumour has it (and by rumour, I mean peer reviewed published scientific literature in a well-respected journal) that there was an outcrop of rock that hadn’t been affected by the impact. I plugged in the coordinates such as they were and set off during the hottest part of the day. Little did I know, I was about to rekindle a relationship I had long ago forgotten about – my love/hate relationship with spinifex grass.

It loves to stab its reverse-barbed silicon-tipped blades of grass into my shins and I hate it with a fury that has its own special little corner all to itself. This particular swathe of grass was 2 m high and a largely continuous matt. I escaped this thicket after fruitlessly searching for the rock which, if it does exist, was not where it was supposed to be. The surrounding area was pretty similarly defended – if they did find this rock, fair play to them. I am, however, yet to be convinced. I came out resembling a pincushion and my shins were needled with so much silica to have been positively bullet proof!

I looked back the way I had come and swiftly decided that the long way round was better. Back at the camp, Martin and Jarryd had decided it was still too windy, so we went for a drive. The idea was to head to the creek to see if there were any important rocks to be found. To add insult to injury, before we even got to the creek there was a small outcrop of quartzite not two metres from the road. 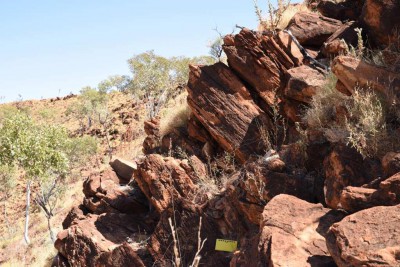 Once we got back to camp I went out again in search of samples and met with much more success. I am now (hopefully) the proud owner of varying degrees of shocked quartzite, some potential melt glass and possibly even some meteorite fragments along with a few other odds and sods that looked cool.

I got back to camp with the last few rays of the setting sun. The lone wandering figure I posed may have confused some German tourists but at least I was headed back to camp. If ever a man deserved a beer I was that man. Speaking of hydration we had a quick stock take of our water supplies and realised we had already gone through one of our three 20 litre drums of water and only now had two left. I had almost single-handedly been responsible for 10 of those litres! We decided to keep an eye on it. We made lamb sausage curry for dinner. I started penning in my notebook but the flies decided they loved my head torch too much so I had an early night instead. Which was just as well…