The Desert Fireball Network cameras have captured the appearance of Nova Delphini 2013 in the constellation Delphinus. A nova is a nuclear explosion in a white dwarf star and appears as a sudden brightening of an existing star. 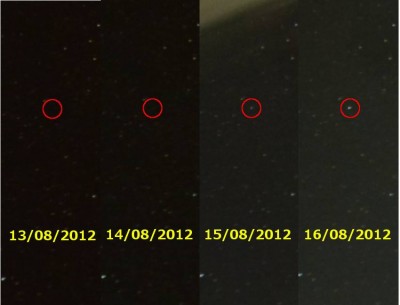 Amateur astronomer Koichi Itagaki first spotted this nova through his telescope on 14th August 2013. Once the discovery was announced, Martin started looking through the footage from the DFN cameras – and found it! Adam, our work experience student, put together this composite image from four separate camera images, showing the evolution of the nova over several days.